All weather, modular, adaptable to the target to be protected, fitted to fixed and mobile applications, efficient in urban and rural environnments.

Facing the development of commercial UAVs and to following overflights of Important Vital Operators sites (IVOs) in 2014, the National Research Agency and the General Secretariat for Defense and National Security has launched a call for Research and Development project to ensure the protection of the sensitive areas against malicious drones overflights. The SPID program has been selected with the objective to detect and neutralize the illegal drone flights over the french territory.

SPID, an innovate project responding to a real need of the public authorities

The Sensitive (Nuclear power plants) or strategical (Elysee Palace) sites overfilghts by civil drones have led public authorities to raise the question of the civil security, on an emerging market with increasing actors. Even if most of them are complying with the legal regulation implemented in 2012 by the DGAC, the illegal, or even malicious, drones overfilghts became a new risk that should be anticipated.

Then, the 18th of December 2014, the ANR launched a call for project aim for a lasting solution to detect the illegal drones overfilghts on the French territory, identify, localize and neutralise these drones.

A Drone Detection and Neutralisation Solution based on complementary technologies

For the drones detection and neutralisation, SPID progam rely on innovative technologies.

For the Pilot and Drones detection, SPID propose a system based on complementary technologies : acoustic (sound detection), optronic (cameras associated with electronic means), radiogonometry (detection and frequency control) and radar.

For the neutralization, SPID decided to use radio direction finding to divert standard drones by taking control and retrieving them. 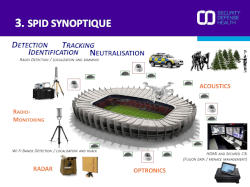 ROBOOST ensures the scientific and technical steering of SPID

The work carried out through SPID

The detection system is efficient and all-weather proof: hence a multi-sensors, modular, autonomous and mobile system in order to cover major events. The acoustic component is based on short-range omnidirectional sensors and long-range directional sensors. The optronic component is based on a 360° vision system. The radio direction-finding component is used for detection and neutralisation, by locating operators, capturing video, interrupt the data-link and hijacking the UAV.

These intelligent sensors are sending data to a central server for fusion and real-time visualization, storage of data as evidence, with a transfer to a third party command post.

The state of the art study covers the neutralization of all existing technologies. A legal and societal study, respect for dual liberties, sociological dimension has been carried out.

Flight tests allowed collecting drones signatures and a qualification of the system.

This project started at the beginning of June 2015 and ended in November 2016 with a demonstration requested by the SGDSN in Villacoublay with the participation of many personalities and people. 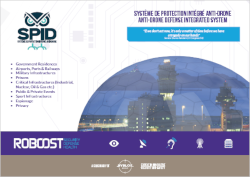 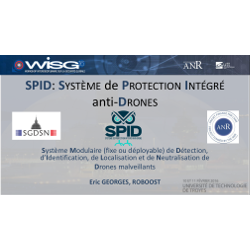 Consortia piloted by ROBOOST retained in AMI 2 & 3, and 4 by SGDSN